Wondering how old your dog really is? There is a difference in dog years and years of humanity; A general rule states that 1 human year is equal to 7 dog years, but even this is not exactly accurate. There are different things like dog breed and size. Rain the most accurate age of your dog with the calculator below and read more about the dog further down the page.

Type as indicated your or your dog's age to find out what its / your age is in the other format. Press Calculate and the result will appear automatically in the fields below the calculator button.

Note: It is a common belief that a human year is equal to 7 dog years. It's not very accurate, since dogs grow up during the first couple of years. The formula used above is from an expert and is a bit more accurate (as accurate as possible). The formula is: 10.5 dog years per year of humanity for the first two years, then 4 dog years per year of humanity for each subsequent year.

How to calculate the dog's year in human years

A common misconception is that the dogs will be 7 years older for each calendar year. In fact, the puppy's aging is much faster during the first two years of its life. After the first two years, this rapid development decreases from 5 to 1 for small and medium-sized dogs. For large dogs, the rate is 6 to 1 while for extra large dogs the rate is 7 to 1. Thus, in the tenth year, a Great Dane will be 80 years old while a Pug would only be 64 years.

How to calculate the dog's year

If a dog's age is unknown to you, there are some ways to determine how old it is. Here are some things veterinarians check to get a general sense of how old a dog is:

Teeth: Dogs usually have a set of permanent teeth at their seventh month, so if you have come across a dog with pear-white teeth, it's probably a year old or so. Gulning on one dog's back teeth can indicate that it is between one and two years, while toothbrush on a minimal level may mean that you are dealing with a dog between 3 and 5 years. Missing teeth or severe wear usually means the dog is a senior and could need special dental care.

Muscles: Young dogs probably have more defined muscles due to their high activity level. Older dogs are usually less defined or fatter because of its reduced.

The fur: A younger dog usually has a soft, nice fur, while an older dog tends to have thicker, coarser (and sometimes fatter) fur. A senior dog can show gray tones or white spots, especially around the snout.

Eyes: Sharp, clear eyes without tears or discharge are common in younger dogs. Cloudy or opaque eyes may mean that it is an older dog.

Use this chart to calculate the dog's age: 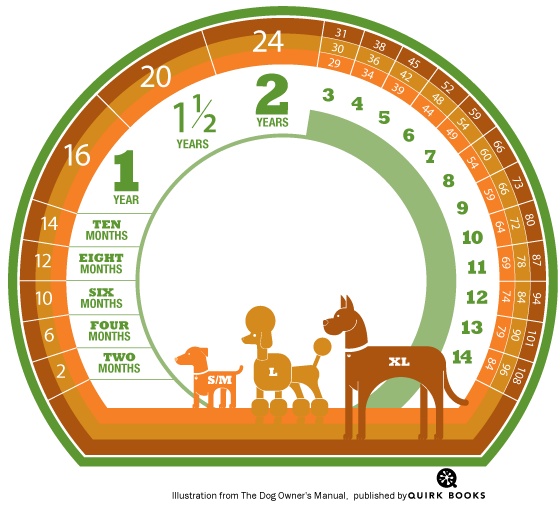 At what age a dog can be considered old varies from breed to breed. Generally, the bigger the dog is, the sooner it's old. For example, a Great Dane may be considered a senior at the age of five, while a smaller poodle will still be quick at twice that age. Keep in mind, however, that just because a dog is chronologically old does not mean it necessarily has an endless series of diseases and "mistakes". In many cases, an older dog can enjoy many healthy, active, painless years.

One of the best ways to extend life and improve the features of an older dog is to carefully regulate its "fuel intake". Older dogs exercise less and thus need fewer calories. And since age reduces their ability to digest and absorb nutrients, high quality food specifically designed for their needs is a necessity. Large amounts of protein, phosphorus and sodium can exacerbate kidney and heart problems, so most foods that contain smaller amounts of higher quality protein, along with reduced amounts of other elements are better. However, the need for vitamins, zinc, fatty acids, and fiber increases.